Dynaguy was a Super who died due to his cape.

Early in his Super career, he came up with his superhero name while eating in a diner by putting "diner" and "guy" together, creating Dynaguy.

Dynaguy was the original leader of the Thrilling Three, which also included Phylange and Apogee.

He was apparently friends with Mr. Incredible (whom was a fan of his) and Elastigirl, as he appears at their wedding alongside Gazerbeam, Stratogale, Meta Man, Thunderhead and Rick Dicker.

He was one of the first Supers sued after Mr. Incredible, due to "public endangerment." Some time after this, he died of a suit malfunction when his cape snagged the ground during one of his takeoffs. He was replaced in the Thrilling Three by Gazerbeam.

Disintegration Rays: Dynaguy had the ability to shoot disintegration rays from his forehead, which would disrupt the atomic forces among atoms. This had a limited range of five meters.

Filght: Dynaguy could achieve flight through ion propulsion gauntlets which were worn on his forearms. 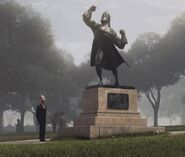 Dynaguy statue at Avery Park
Add a photo to this gallery
Retrieved from "https://the-incredibles.fandom.com/wiki/Dynaguy?oldid=8939"
Community content is available under CC-BY-SA unless otherwise noted.