Firebreak was a superhero who appeared in LEGO The Incredibles in 2018.

Firebreak appeared near the end of The Incredibles 2 as one of the attendees of Winston Deavor's legalization of supers. 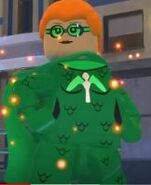 Add a photo to this gallery
Retrieved from "https://the-incredibles.fandom.com/wiki/Firebreak?oldid=7954"
Community content is available under CC-BY-SA unless otherwise noted.