Reflux (real name Gus Burns/in the official handbook for young supers they call him Gurdley Mola) is a character in the 2018 sequel Incredibles 2. He is part of a group of second-rate Supers who aspire to join the ranks of superheroes.[1]

Reflux was brought in to Winston Deavor's superhero recruitment program with other Supers where he meets the veteran superhero Elastigirl. When he talks with her, Reflux makes a joke about the repugnant nature of his superpower. However, Reflux becomes a victim of Evelyn Deavor's mind control when Hypno-goggles were placed over his eyes, and he was ordered along with the other mind-controlled supers to capture Frozone and the younger members of the Parr family, although they only succeed in capturing Frozone.

Still under Evelyn's control, Reflux attends the superhero conference onboard Winston's cruise ship as Evelyn's security force. After some of the heroes are freed from the Hypno-goggles, Reflux uses his powers in the battle against the Incredibles, at one point significantly hindering Violet's force field with his corrosive regurgitation, before he meets his match against Frozone. Their elemental powers initially clash until Frozone overpowers Reflux into submission and have the Hypno-goggles removed, freeing Reflux from the mind control. Reflux then helps get the rest of the guests to safety. After the crisis is averted, Reflux is last seen celebrating the Supers' return to the public. 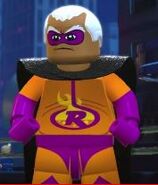 Reflux (lego)
Add a photo to this gallery

Retrieved from "https://the-incredibles.fandom.com/wiki/Reflux?oldid=7491"
Community content is available under CC-BY-SA unless otherwise noted.